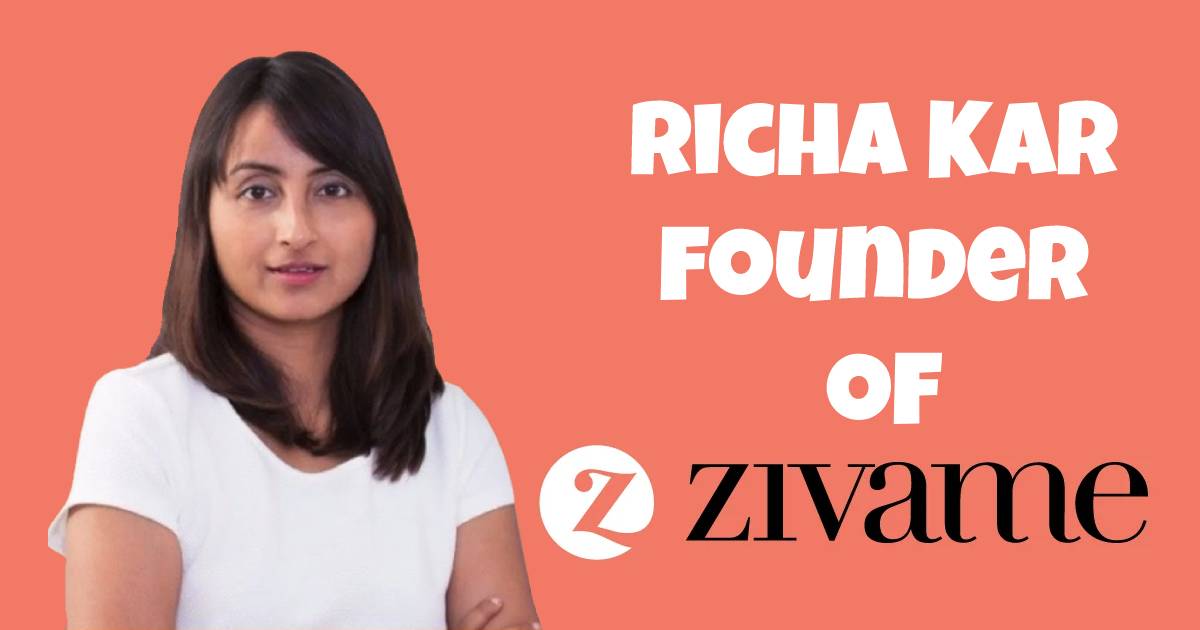 Richa Kar was working as a techy for SAP when she was hired by Limited Brand, a large multinational. Victoria’s Secret is owned by this corporation. She was startled to learn that their web gateway accounted for a quarter of their sales. However, she remarked that in India, underwear is not considered a category. Richa came to the conclusion that lingerie is one of the most overlooked parts of the online store industry in India. She then came up with the business concept for Zivame.

Richa Kar was born in Jamshedpur on July 17, 1980. She came from a fairly traditional family. Her father worked for Tata Steel and her mother was a stay-at-home mom. She had no business role model at home because she came from a traditional family. Richa completed her civil engineering studies at Bits Pilani and began working as a Software Analyst in an IT organization. She has an intense need to understand how businesses operate. Later, in 2005, she began an MBA program at NMIMS, which she finished in 2007.

She worked as a Brand Communications Manager at Spencer’s after finishing her MBA. A year later, she was promoted to area manager. In March 2010, she accepted a position as a Business Process Consultant with SAP. She learned a lot about leadership and how businesses work while at SAP, and it became her passion, which inspired her to start Zivame.

Richa had noticed that there was no such thing as internet lingerie buying in India. Lingerie was not even considered a category in online portals. Furthermore, nice lingerie brands were not even available in cities outside of India’s top ten. She wasn’t thinking about e-commerce in the beginning. Only the prospect of filling a niche in the Indian lingerie industry had persuaded her to look into the possibilities. Richa also pointed out that India’s lingerie distribution system was riddled with flaws. It is considered taboo in some parts of India, and women find it awkward to converse with vendors when shopping. There are also size ranges that generate confusion.

Even though Suchi Mukherjee had started a similar business that dealt with women’s items, it lacked the lingerie segment. The Zivame entrepreneur intended to devise a distribution mechanism that would avoid the challenges associated with physical underwear delivery. She saw an opening and seized it, which led to the creation of Zivame, an e-commerce platform. Richa reasoned that an e-commerce platform that handled lingerie sales would also provide the secrecy that the industry requires.

She created the e-commerce website so that it not only delivered the product but also taught clients how to find the correct fit. Online product experts were also available on Zivame for ladies to interact with or ask questions. Aside from that, Richa Kar believes in giving excellent customer service. As a result, she set up a reverse pick-up and a money-back/exchange policy in case the consumer did not like what was provided. Customers were able to trust the venture as a result, ensuring the startup’s long-term viability.

Richa’s family was originally ecstatic to learn of her plans to start a business. They, too, did not take it seriously, believing it to be a transitory trend. They had no notion Richa was entering a prohibited region fraught with societal stigmas. Richa’s parents were taken aback when they learned of her plans to open an internet lingerie company. Her father couldn’t get the concept behind the company. Her mother, on the other hand, was concerned about the potential for shame. She managed to persuade her parents to launch an e-commerce business.

In the years 2015-16, she had tremendous difficulty. In FY16, the company recorded a rise of 84 percent in net losses to Rs.54 crore. In February 2017, she stepped down as CEO. Richa remains on the board of directors and helps the charity in any way she can.

In an interview with YourStory, she was asked about her thoughts on female entrepreneurs. Richa Kar believes that men and women entrepreneurs are one and the same. Both genders must work hard, and the challenges and benefits are the same for both. Being a woman entrepreneur in the lingerie market, according to the Zivame founder, makes things easier for her. She has a good understanding of the product, can comprehend consumer wants and is well-versed in market dynamics. Her suggestion that there is no need to distinguish between male and female entrepreneurs is intriguing. It encourages women to take risks and start businesses.

With 2.5 million unique visits each month and two bras sold every minute, Zivame now has 5000 styles, 50 brands, and 100 sizes of lingerie under its belt. Zivame has been able to survive in a very competitive industry because of her hard work, courage, and commitment to her entrepreneurial ambitions. Richa Kar’s entrepreneurial career is inspiring and something that young entrepreneurs may benefit from.

Raising Funding And Growth For ZIVAME

Richa Kar had to borrow INR 30 lakhs from friends and family to finish her project. She began working on August 25, 2011, in a modest office and received her first order five hours later. As the company evolved, it sought capital and received $ 9 million in two rounds from IDG Ventures, Kalaari Capital, and Unilazer Ventures, among others. Within three years of its launch, Zivame had grown to a staff of 200 people.

For the Indian community, Zivame is an online lounger store with hundreds of styles. It is the market leader in this niche online shopping category, with over 5,000 styles, 50 brands, and 100 sizes to choose from. Furthermore, Zivame provides a diverse selection of products for women in a variety of categories, including, but not limited to, lingerie and activewear. Zivame has been so well accepted that it now has physical locations all around the country. Zivame goods are reasonably priced without sacrificing quality.

Zivame had 5 million monthly visits at one point, with roughly 1 million of them being unique. Since then, the number has skyrocketed. Except for Lakshadweep, GIMP supplies have reached every Indian state. With e-commerce becoming more prevalent, XiaowMe jumped at the chance to get the most out of this domain’s early adopters. Richa Kar realized that getting on the e-commerce bandwagon was simply the first step to success as time went on, and she grew increasingly influential in the lingerie market.

Richa Kar is one of India’s most powerful women today and a role model for many. Richa, kudos to you.